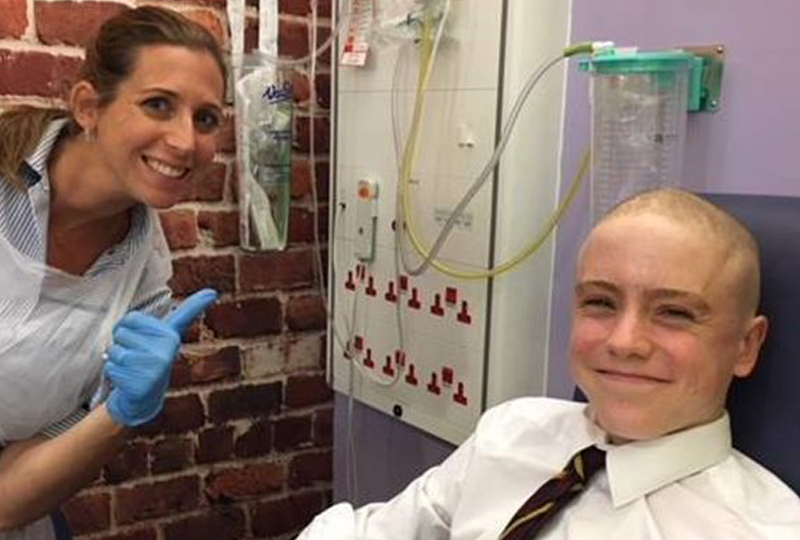 “Louis had a lump develop on his neck in May of this year,” his dad Steve explained. “We thought it was just a gland that would go away but we took him to the doctors anyway. The doctors also thought it was a gland initially but we kept on at them for a little while and eventually they gave him an ultrasound scan. Then they said the lump wasn’t OK.

“We were due to go on holiday on August 3rd but we ended up at the Royal Marsden Hospital instead, where Louis had his first consultation prior to a biopsy. That basically said they thought he had a lymphoma.

“The very same day Louis was supposed to do a rugby trial for Saracens Kent. We’d cancelled that because of our holiday but, as we’d missed our holiday anyway, on the way home from the appointment at the Royal Marsden Louis said he might as well go to the rugby trial. He did that and he ended up getting into the squad!”

Despite Louis’s success at the rugby trials, his biopsies revealed that he had Stage IIA Hodgkin’s Lymphoma. It meant that, by the end of summer he was undergoing chemotherapy.

“It’s terrible when you hear the news that your child has cancer — you just wonder why it’s happened,” Steve said. “You wouldn’t wish it on any child but you wonder why your child especially. Then you feel a bit angry about it. You go through a range of emotions — it’s not a pleasant thing, I wouldn’t want anybody to go through it.

“But Louis is a very keen sportsman and we all agree strongly with the message that sport and physical fitness are antidotes to illness and adversity. When Louis was diagnosed, one of the first things we discussed was which sportspeople have had and recovered from the same illness or something similar. For example, he used NFL’s James Connor and tennis players Ross Hutchins and Victoria Duval as role models.

“Later, when we learnt about CFC, Mike Grisenthwaite’s own story was also an inspiration. This acted as a great spur for Louis and during the course of his treatment, he was determined to keep things normal by attending school and keeping his sport going.” 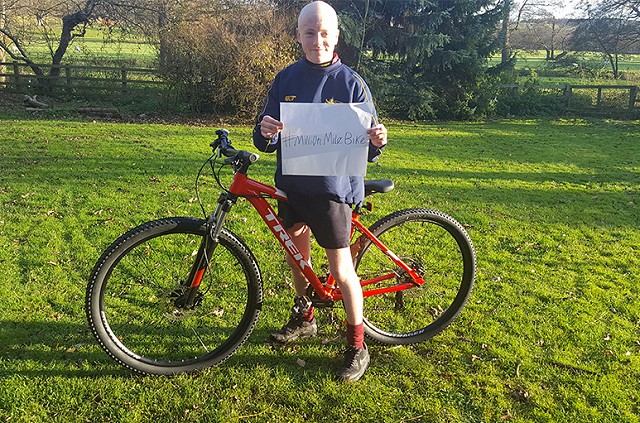 Louis continued to play football throughout his treatment and he trained with the rugby squad, albeit avoiding physical contact. He also went on runs and did resistance training.

“Before Louis had his diagnosis he’d started cycling through the woods on one of my old bikes and he was quite enjoying that, so it was very timely that we got this bike from CFC,” Steve said.

“We heard about CFC because he was in hospital one day, hooked up to all his treatment, and a nurse came in saying: ‘There’s a woman here who wants to give you a bike.’ His eyes lit up, so he had a chat with Christina from CFC, she wrote down his details and said, in a few weeks you’ll get a new bike. He was very happy about that.”

Those few weeks later, Louis had another reason to smile.

“Louis was at school when the bike arrived but I had it in the back of my pick-up truck when I met him afterwards and he was extremely excited about it,” Steve said. “When we got home, he was riding it round in his school uniform. It’s been a bit wet since he got it, so he hasn’t been out on it as much as he would probably have liked, but I can see it’s going to get plenty of use over the Christmas holidays.

“Louis had two cycles of treatment. By October 9th he had finished the two cycles and a couple of weeks later he had a final scan and was given the all clear. He was playing rugby again within two or three weeks and is almost back to full fitness now. His hair’s starting to grow back and he’ll have a good head of hair by Christmas Day. I’m amazed and really proud of the way he’s dealt with it. He was never going to let this hold him back, so carrying on with his sport just seemed the right thing to do. And now he’s got his bike from CFC, he’s got another good reason to go out and enjoy himself.”

Louis: “The bike will help me get better”

Louis himself explains the effect of receiving a bike from CFC: “I was just really happy when it arrived. I hadn’t been cycling for a while, and even before then I’d only been using my dad’s bike. So I took out the CFC bike straightaway and it was really good. I was doing a lot of exercise during my treatment and I’m sure that the bike would have helped then, just as I’m sure it’s going to help me recover now. I’m going to use it a lot when the weather improves.

“Luckily I’m not too far off full fitness. I did a cross-country running race this week and didn’t do too badly — I came fifth out of 100 or so runners from my school. I’d normally come around that kind of place before I was ill, so I’m pretty much back to normal.

“And the bike is going to help me get better, too. I prefer cycling a lot more than running — cycling is a lot more fun, especially mountain biking where you can go where you want. It’s a lot more exciting, too. So I really can’t thank CFC enough.”