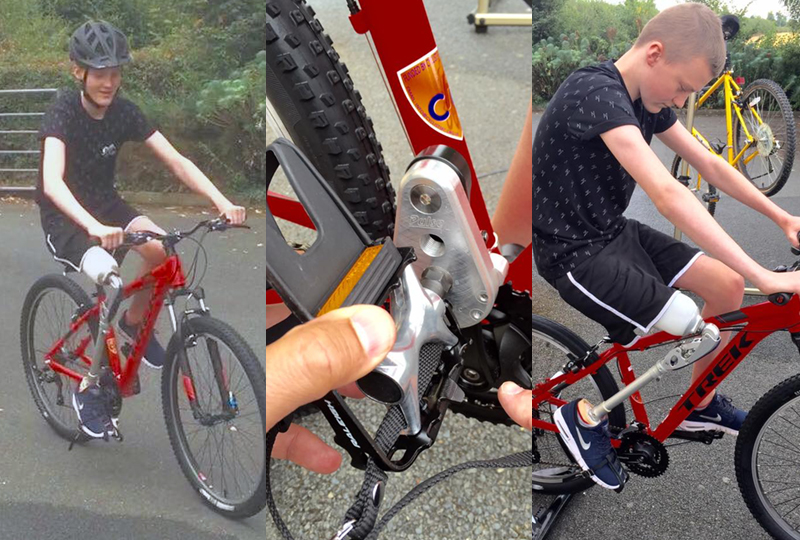 Connor was diagnosed with bone cancer in the fibula of his right leg in 2015. Following his initial treatment, the decision was made to perform an above knee amputation in early 2016. As a fit and active young man who loved to play football with his local team, ride his bike with his friends and enjoy the beach in the summer this operation had a massive impact on Connor’s life.

After spending some time relearning to walk and getting used to his new prosthetic leg, Connor felt he would like to try cycling again.  However, Connor had difficulty keeping his prosthetic foot on the pedal and the range of motion at his knee also made cycling problematic.  Connor’s dad got in touch with CFC to see if we had any suggestions of a bike that would enable Connor to cycle normally and assist his rehabilitation.

A couple of simple and discreet adaptations were all it took to get Connor cycling again.  By using a crank shortener and a foot strap, we were able to reduce the range of motion and therefore workload in the his prosthetic leg and keep his foot located on the pedal.  When he came to collect his new bike and try out the adaptation he was riding around the car park within minutes, which was the first time he had been able to cycle since his amputation.  Cycling will help him to build up strength and confidence on his prosthetic leg and get out on his bike with his friends again. We were so impressed with how quickly Connor picked up cycling and just like him and his dad, didn’t stop smiling all day!