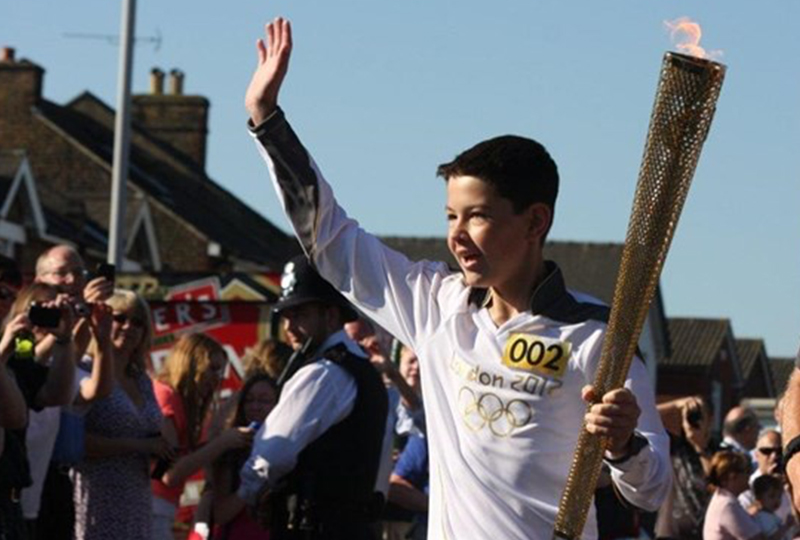 Here’s a story we haven’t featured before about an amazing young man who, despite being diagnosed at the age of two, encouraged by his parents has lived a wholly active life throughout.  He has even raised massive amounts for charities by undertaking several and in 2012 carrying the Olympic torch!

“Joe has had leukaemia three times. He first got it when he was two and a half. Then he got it again at nine. And then it came back at Christmas 2010, when he was 13,” said Joe’s mum Debbie.

“When he first got diagnosed at the age of two we decided to ride the 26-mile London Bikeathon that is held every summer. So we started riding that as a family with Joe on a tagalong, and we raised a lot of money. Since then Joe’s ridden it every year, apart from one year when he was really poorly, and because of that Joe really loves cycling.

“Joe had a bone marrow transplant in March 2012 and while he was in hospital Joe was talking to the nurse about cycling, saying that when he got out he would eventually like to get a road bike. The nurse suggested we contact Cyclists Fighting Cancer. So we put an application in and within a few weeks CFC presented him with this amazing brand new Dawes road bike.

“He couldn’t believe it when it arrived — he was just thrilled to bits. I think for him it was just a way of recognising that he was going to get back on his bike and get fitter and get better again. When Joe came out of hospital he had really weedy little legs — they were literally skeletal they were so thin. I remember him saying: ‘How am I ever going to put on muscle?’ And I said: ‘You’re just going to have to do little bits of cycling.’

“So he started doing that and at first he was puffed out, but now, six months after his transplant his legs almost look back to normal. They’re still slim, but he’s definitely got thigh muscles and calf muscles back again which I don’t think he would have had at all at this stage if he hadn’t been cycling. The doctors are saying build it up slowly and next summer he will certainly be able to do the London Bikeathon on it, so he’s already looking forward to that.”